hand used in the Isabella Breviary, made around 1497, in Holland, for

Isabella of Castille, the first queen of united Spain.

(GPL). You should have received a copy of the GPL along with this

program; it's in a file called COPYING. If not, write to the Free

Where the GPL refers to "source code", I take that to refer to the

file called Isabella-first.sfd, which is a file for editing with

program. Pfaedit is not GPLed, but its license does seem to count as

free software (it's BSD-style, without the advertising clause). Thus,

according to the GPL, if you distribute this font, you must make

the GPL specifies for source availability.

At the time of this writing, Isabella-first.sfd is available on my

The font is, I think, complete for Latin-1 and Latin-2 (and maybe

others); it covers the first 384 characters of Unicode, not counting

control characters. It also has some other characters (e.g., the

quotation symbols used in Spanish), for a total of 342. If you find

that some character from your language is not quite right, please be

kind; the only languages I've known are Latin, English, Spanish, and

German, which means that most of the letters outside ASCII are new to

ess-zed. I had never heard of, say, ogonek, or accents on consonants,

before doing this font.) It has a Euro symbol.

Naturally, the Isabella Breviary does not have an example of, say, @,

so I drew such characters as best I could. The primary design goal on

such characters was to look like something done with a calligraphic

pen; the secondary goal was to look like the other characters of the

font. So, for example, the copyright character ("c" in a circle) is

made by shrinking down the letter "c" and placing it inside a circle.

The original hand, like many medieval hands, has a half-r character,

figured out how to get pfaedit to produce ligatures; for now, the "or"

character is in the character position for Greek lowercase omega.

I have added them. Unusually, the original hand *does* have a "v";

many medieval writers used "u" instead. In addition, there was a

"long s", which was used in the middle of words (for which reason it

is also called the "medial s", and the modern "s", used at the end of

words, is called the "terminal s"); I have provided one. The German

ess-zed (looks sort of like a Greek beta, but isn't) originated as a

ligature of the long "s" followed by the short "s", so, in this font,

Microsoft Word 2000 has trouble with the long "s"; it introduces a

line break before and after the "s".

The ampersand is perhaps too authentic; it's not really recognizable

to a modern eye. Feedback is welcomed: 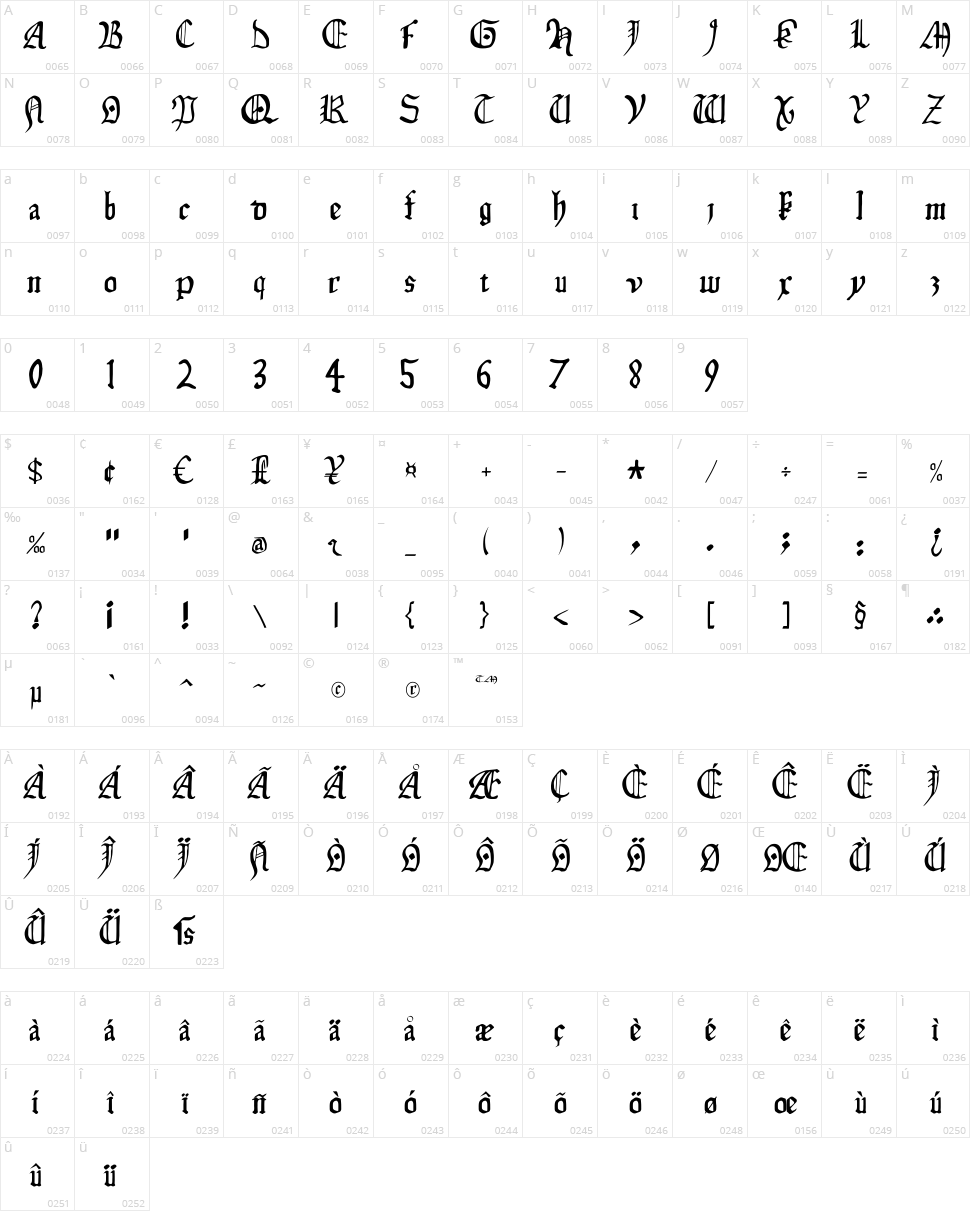