You've chosen to download a freeware font I created called

"US Flag," and I hope you find it useful. I also hope you

intend to use it in a respectful manner.

WHY I CREATED THIS FONT

I created the font, in part, because I needed it for a

project, but also because I noticed other vendors were

selling similar flag fonts in an attempt to capitalize on

recent events (I mean, c'mawn...). Some are offering fonts

for sale and donating the proceeds to charity, and I whole-

heartedly support their efforts, but to those whose aim is

to profit from the recent surge in patriotism and renewal

of American pride and spirit, well, I guess I have a problem

with that. The image, as well as the spirit, of the American

flag is Free and always will be. It belongs to everyone, and

anyone who wants to display it can, and should, without

who wants it. It's a small act. And I don't say that out of

modesty. It really is (which is another reason I have a

problem charging money for it). Anyone with a decent

illustration program and knowledge of the flag's dimensions

and layout could create the artwork in under an hour. To

import the artwork into a font editing program (I used

FontLab 3.1) and clean it up takes a little more time and

effort. I'll post an article on the FontSite.com detailing

There are three flag characters and two US images located

on the A through E characters (upper and lowercase). The

flags located on the A, B and C keys are single characters

and thus can only be a single color, which is fine for, say,

black and white output to a laser printer. But as everyone

knows, the US flag is red, white and blue. How do you create

a flag using its true colors? I'm glad you asked.

parts. Type the 1 key followed by the 2 key to create a

standard flag. Type the 3 key followed by the 4 key to create

a wavy flag. Type the 5 key then the 6 key to create another

wavy flag (the direction of the wave is different). The 1+2,

not work (well, you could do it, but it wouldn't look right).

So as you can see, using these characters you could create a

red, white and blue flag. Set the font color to blue and type

You'll see white stars on a blue field (assuming your back-

ground is white). Now set the font color to red and type the

You now have a red, white and blue US flag.

Please feel free to distribute this font as you see fit, but

please also distribute this ReadMe file along with it (I'm not

above wanting to make my opinions known).

If you have any problems using or installing the font -- or

any other questions or comments -- feel free to email me at

PS: I created this font on the 27th anniversary of my father's

death. My old man was an English teacher who died on November 19,

Marine Division, and a combat veteran of the Korean War. 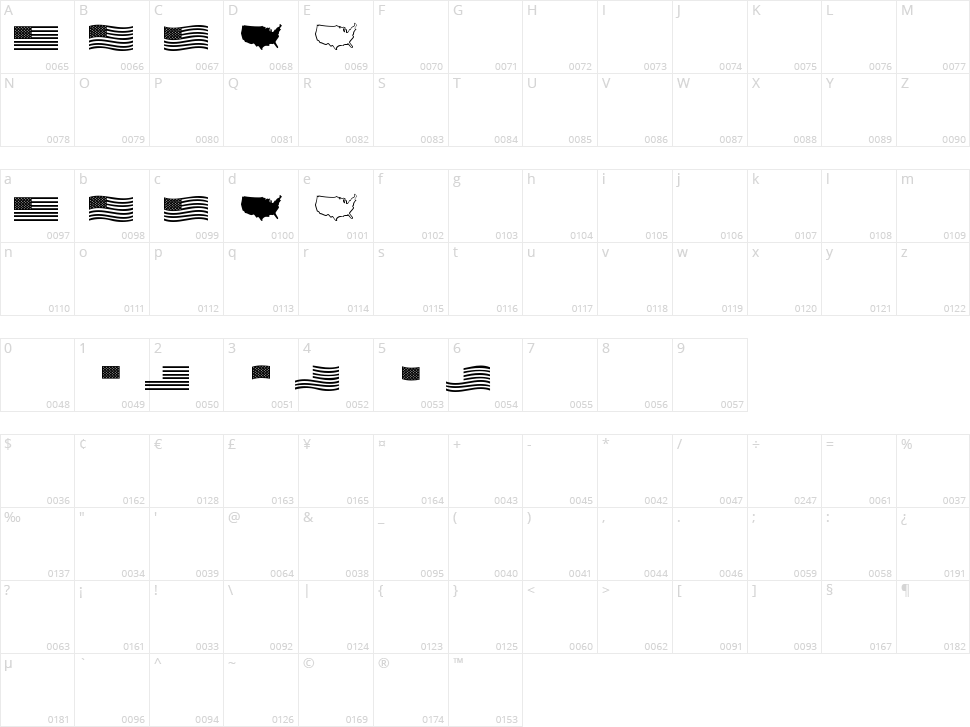