possible to attach smiley faces in your documents without lifting

a pen. Over 100 characters filled with happy, sad, angry,

confused, and silly faces. You can convert the characters to

outlines in Illustrator, Freehand, or Canvas and edit to your

Smileyface Font is "Shareware"*. If you find this font amusing,

Outside the US, make sure that your check is drawn from a US

This font is FREE to registered users of previous versions.

Freeware PICTURE FONTS (including the latest version of this

font) send $24.95 to the address above. Make sure to specify

which computer system and font format you use (Mac-PostScript,

Shareware is a means of distributing software on a "try before

you buy" basis. Shareware allows you to try software programs,

clip art and fonts before you purchase them. This allows you to

determine if the shareware product you are trying meets your

needs and will work with your computer equipment. After you

have tried the product, you are required to either purchase the

product or delete it from your system. The shareware concept

relies on the basic honesty of the user (or "potential buyer").

Remember that many shareware authors and developers are people

products that make your (computer) life more productive and fun.

characters (including a computer, a dog, the sun, and others).

characters. Six are "freeform" characters and four are

a bug fix that didn't allow version 2.2 to print (Mac/Windows) or

"rough" look. These characters are best viewed at 60 points or

higher. A few of the characters have been moved to make room

for the new smileys. Specifically, the smileys found under

numbers 0-9 have been moved to other slots. Also, the standard

** Use the "style" menu in your word processor to create even

** Use this font in your paint or drawing program as a

** Use with America Online version 2.0 to send messages --

Jonathan is available for custom font work, illustration and

design. He may be reached at: 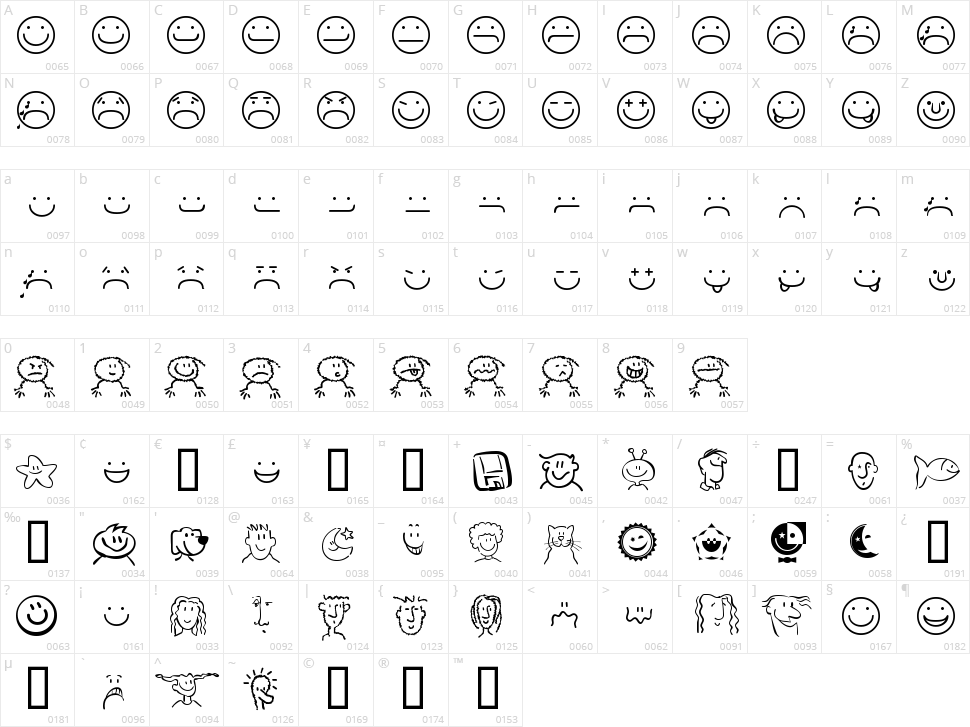